Manaslu Trail Race: the 2nd of my only two steps of trail running

Why do we run? I wanted to have a one-liner that would give people goosebumps while reading. Just the way I feel a chill everytime Bruce Wayne’s father answers his own question “Why do we fall, Bruce?” Well I tried but no answer came to mind.

Anyway, ask this question to every runner you know and it is either a physiological or a philosophical reason.

So what do you get by running? I would commonly go along the lines of lactic acid, musculoskeletal aches and fatigue. I read somewhere that running marathons can release endorphins. Still might seem like an awful lot to do for some chemicals that you can also have released by eating chocolates, going shopping or making love.

So while long distances running can be hard, doing that for eight consecutive days can be harder and doing that at altitude even more so. That is almost precisely what I did last week in the Manaslu mountain trail race. I add ‘almost’ because I did not ‘run’ the whole thing. I basically did what I am more used to doing- which is trekking at a fast-normal pace. I could play my “I would want to remain a ‘fresh’ expedition doctor at the end of the day” card every time.

The Manaslu Mountain Trail Race was a great experience on so many fronts. It included just above 200km of total distance over 9 days (racing and non racing days – it did not matter to me though) with countless meters of change in elevation. I am aware that my description of it on my Facebook album as “so much for my eyes, a little too much for my knees” makes it seem like a very hard thing to do. But to be honest, this is one of the races where if you are just a trekker and not an elite runner, you may not come first but you still win.

Not my first trail ‘running’ experience of course (as evident from the title of this blog). I did the Mustang Trail race this April and returned with a glorious amount of satisfaction. Although I do not have a blog post to prove it. This amazing experience came with even more positives. It could not have had a better timing- immediately after my USMLE step 1. And while I strolled past the beautiful mountainous panorama, the peaceful sound of the fiery rivers, the turquoise lakes, the yak-bells ringing in no particular tune while on their way to Tibet, my mind was the perfect futsal ground for me to try to score a soul-searching goal (it turned out to be a goalless draw). 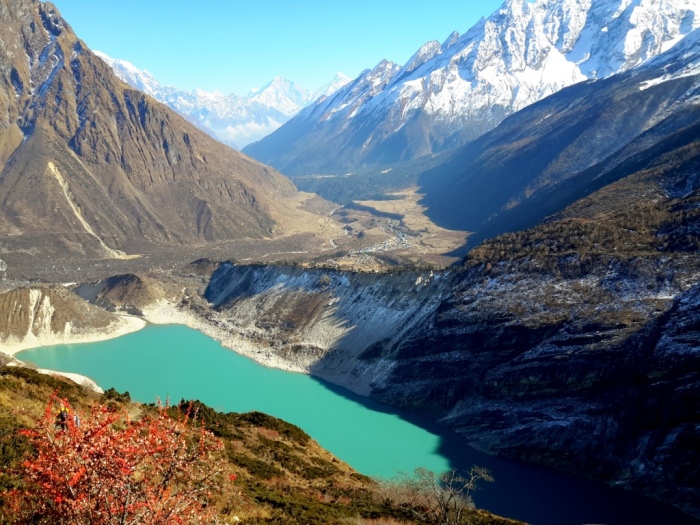 Manaslu trail has to be mentioned as one of the most attractive trekking trails. With the earthquake and lots of recent landslides in the region, being so close to the epicenter, it was understandable that there were few tourists and travelers (same as everywhere else in Nepal this year). But I would be genuinely surprised if it did not climb up in the to-do-list of trekking routes once Nepal starts to become what it used to be.

Coming back to trail running, while I may or may not further my two steps towards becoming a self-proclaimed veteran runner, I would certainly say that my take on running as a sport has changed considerably. Having done both Mustang and Manaslu trail races, if someone asked for my recommendation, in one word, my reply would, of course, be “both”. Run it all. Because you deserve to feel what I felt.

bikksie ..bad at describing myself. Well I love listening to music and travelling in addition to other things.
Published November 26, 2015September 1, 2016

4 thoughts on “Manaslu Trail Race: the 2nd of my only two steps of trail running”